“You’re All Racist!” A Restorative Circle About a Sign

[Inspired by a real circle story as told to me by the circle keeper; identifying information and details changed.]
​
Taisha was a young lady with passion.

On their good days, the staff and teachers at Taisha’s school reminded themselves that this was a positive – that she cared about things – that she was ENGAGED.

On other days, the feeling was that Taisha required a lot of work from a lot of people and that she was always complaining about SOMETHING.

At first, this conflict seemed like another one of those many “complaints”.

Mr. Artsy was in charge of the bulletin board by the cafeteria, which had monthly inspirational themes. The March theme was “Stronger Together” and had quotes about working together, collaboration, and team work.

During passing time, Taisha saw Mr. Artsy stapling a picture to the board of multi-cultural hands clasped together. 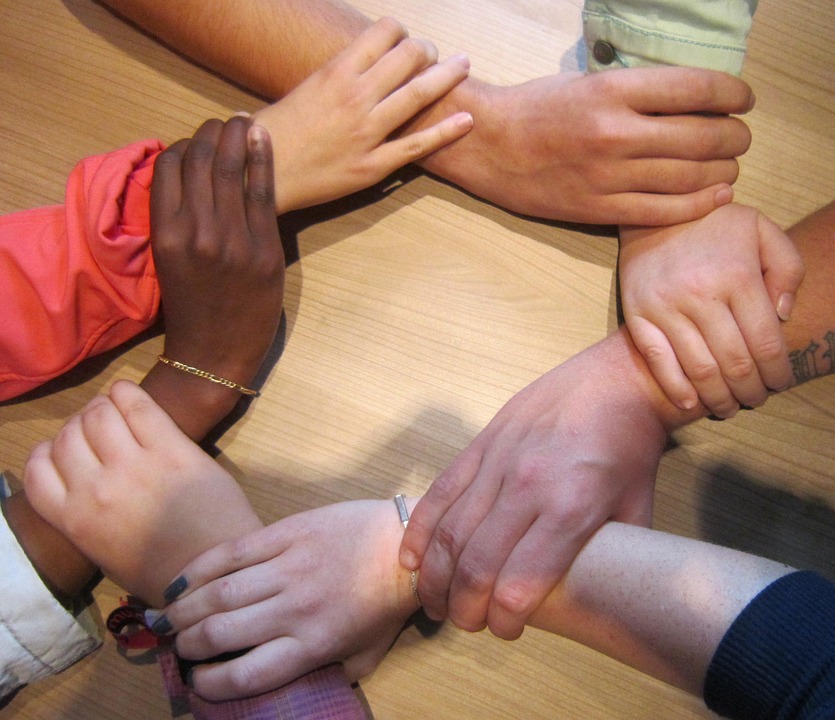 “You should add a Black Lives Matter sign to that board” she said to Mr. Artsy.

“I don’t think that’s going to happen,” Mr. Artsy said, smiling at Taisha to indicate it was nothing personal.

“It’s not part of the theme. It’s a whole different thing. Not for this month. Shouldn’t you be getting to class?”

Making a disdainful face, Taisha stomped away down the hall to the office of Ms. Open, one of the school’s social workers.

“Taisha, honey, that board is Mr. Artsy’s domain,” Ms. Open said kindly. “I am sure he has a vision for it that he has thought out carefully. We are not going to butt into it.”

“I’m not butting in. This is important. His sign says Stronger Together and BLM is all about that. So what’s the problem?”

“Taisha, the bell just rang and you gotta get to class. Why don’t you let this one go?” Ms. Open advised.

“I am NOT letting it go. This is bullshit! You are all racist! I am going to go to the school board about this!”

Ms.Open gave a tired sigh and tried to listen underneath instead of reacting to Taisha’s tone and threatening words.

“Taisha, I hear this is important to you. That you care about this movement. I also want you to get to class and be able to focus. How about we have a restorative circle about it during your study hall tomorrow so we can all hear each other out? And problem solve together?”

To Ms. Open’s surprise, Taisha said that would work for her.

Ms. Open, who had been learning to be a circle keeper, agreed to facilitate. She was following Dominic Barter’s Restorative Circle process, in which the circle keeper supports dialogue by preparing all parties ahead of time and checking for understanding during the circle.

She met with Taisha the next morning and used a Self-Reflection sheet to help explore underlying feelings and needs. Ms. Open then met with Mr. Artsy and did the same, with an adult version of the sheet. 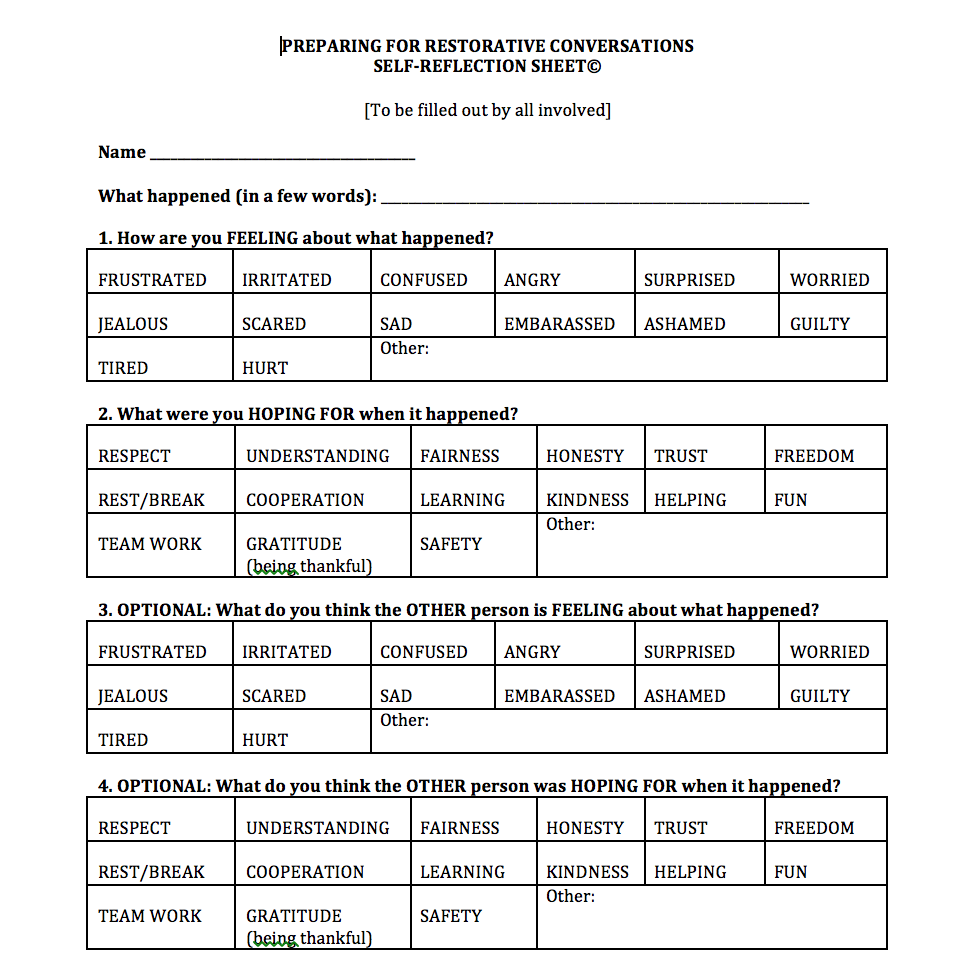 After that, Ms. Open confided in Ms. Supportive (a teaching assistant) and Ms. Wise (a teacher), since they both connected well with Taisha and were also learning to be circle keepers. Ms. Open shared with them the feelings and needs she heard in the prep meetings and invited them to the circle.

In the circle, Taisha and Mr. Artsy did most of the talking, and things seemed to be going nowhere.

“What are you hearing, Taisha?” Ms. Open said.

“That he doesn’t care about black people. That he wants to stand up for everybody so he stands up for NOBODY.”

“Is that it? Is that what you wanted heard?” Ms. Open said calmly.

“No. That is NOT it,” Mr. Artsy said in an irritated voice. “I want you to know that I am trying to watch out for the needs of the WHOLE school is all.”

“That other people’s needs are more important than my needs,” Taisha said.

When it was Mr. Artsy’s turn to listen, things went no better.

“What do you hear Taisha saying, Mr. Artsy?”

“That she only cares about her project and not about the opinions or struggles of other people.”

“Is that right, Taisha?”

“This is bullshit! He is putting words in my mouth. This circle is stupid!”

“Well, I don’t think you really want to find a win-win,” Mr. Artsy retorted. “I think you just want your way and you’re using the circle to try and get it.’

And so it went from there, with Ms. Wise and Ms. Supportive adding almost nothing. When the bell rang, Taisha was pouting with her hands crossed defensively while Mr. Artsy sat in stony silence with his lips pursed.

“How about we all re-group and continue this tomorrow” Ms. Open said, feeling drained.

After everyone left the office, Ms. Open emailed me asking for a quick consultation call.

“Ok, I think I see the issue,” I told Ms. Open after a few minutes of explanation. “Ms. Wise and Ms. Supportive are acting like silent co-facilitators. Because you did not have prep meetings with them and because you confided in them about how both Mr. Artsy and Taisha were feeling, I think they felt like fellow circle keepers and were being careful not to take sides with a heated topic.”

“I think your circle would benefit from having them become official circle participants who can speak openly as themselves any time. In fact, they are probably your missing link to the circle becoming a true circle. If possible, they need to both be prepped by tomorrow and come back to the circle as PARTICIPANTS.”

“Also,” I added, “remember that even though you want to be multi-partial – you can still support understanding when participants get stuck, by letting them know the feelings and needs YOU hear underneath – and checking if that’s correct.”

Armed with increased clarity, Ms. Open went back to Ms. Supportive and Ms. Wise and explained the plan, asking each of them to prep the OTHER using the adult Self-Reflection sheets.

The next day, despite the difficult start, everyone gathered at the office again. Ms. Open brought candy bars to sweeten the deal.

With Ms. Supportive and Ms. Wise speaking up as participants, and Ms. Open helping people hear each other when they got stuck, the circle had a lot more movement. In fact, it felt to Ms. Open that they actually HAD accomplished a lot of ground work the previous day, even though it FELT like no one had been listening.

After some mutual understanding and empathy was built among them, participants began to create agreements for moving forward.

“How about an All Lives Matter sign?” Mr. Artsy offered. 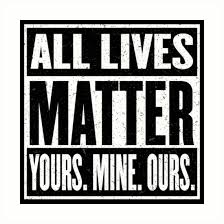 “Hmmm. I don’t think that really speaks to what’s in Taisha’s heart. How about one of those Hate Has No Home Here signs in many languages?” 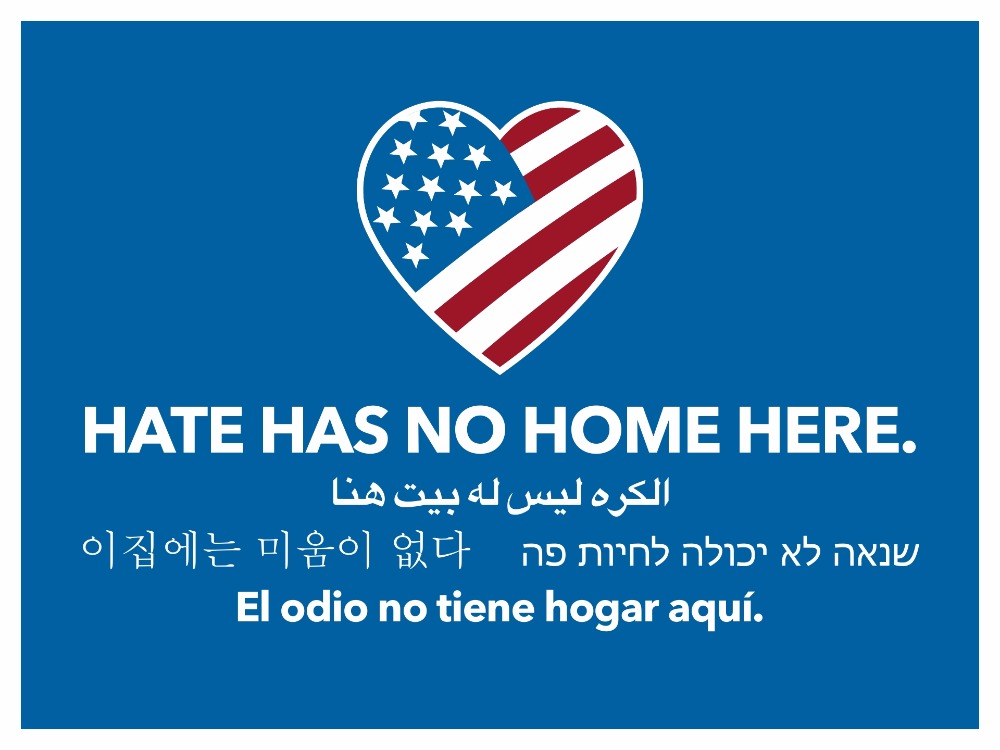 ​
Both Mr. Artsy and Taisha looked resigned. It didn’t quite feel like a win-win yet.

“I have a friend who makes these Etsy signs,” Ms. Supportive said, “In This House We Believe…” and you can add any lines you want to it. Why don’t we make a version of In This School We Believe…“

“Hey. That would be pretty cool,” Taisha said, “We can get all the students to add to it!”

“And the teachers and staff!” added Mr. Artsy with a smile.

“We can go around to homerooms to get people’s ideas!” continued Taisha.

“We will need to check it out with the principal, but that sounds good to me,” Mr. Artsy said.

Everyone agreed to talk about the details after talking with the principal – and the participants left satisfied and connected.

“What I really like,” Ms. Open said to me on the phone afterwards, “is how Taisha is going to use her passion to organize something positive in the school that actually supports the spirit of Mr. Artsy’s bulletin board – Stronger Together!”